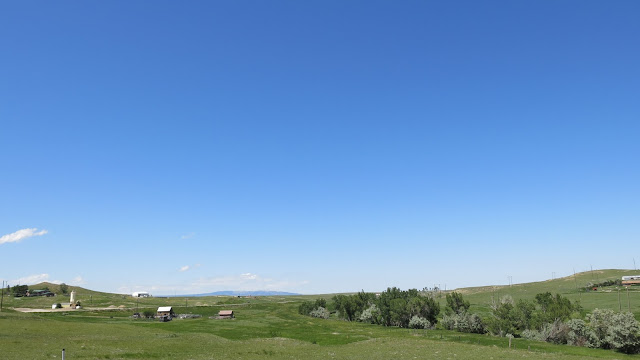 The Northern Montana Division of the Milwaukee Road was built to populate the vast lands of central northern Montana. It started in Harlowton MT, the beginning of the catenary to Avery Idaho, and a main division point where the steam/diesels coming in from the east gave the trains to the Boxcabs and Little Joes. 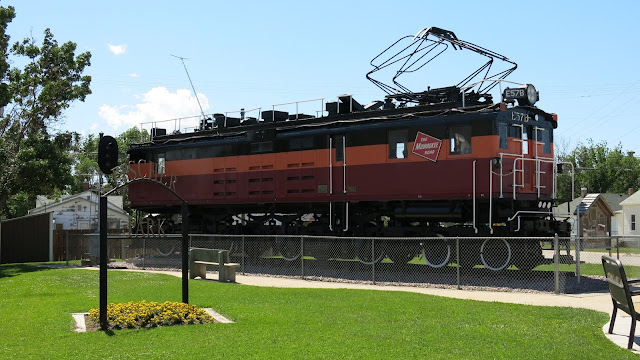 The Northern Montana division was not under wire, this was the the land of steam, and later diesels, whom roamed the grasslands and coulees in search of passengers, livestock, grain and minuteman missiles! 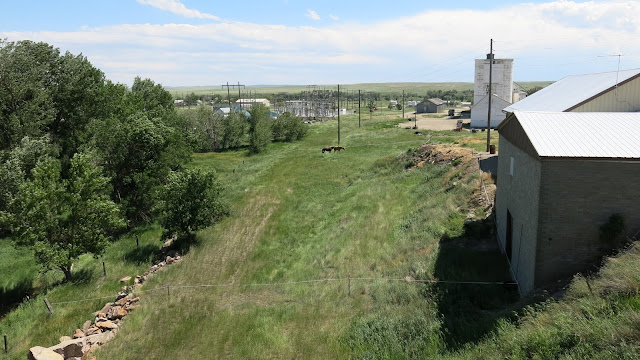 (ROW looking toward the Harlow yard beyond the small white tanks)

The NMD left Harlow from a wye just the east of the Harlowton depot, past the Montana flour mill, under the Hwy 12/191 overpass and north to Judith Gap, Straw, and eventually Lewistown Montana. 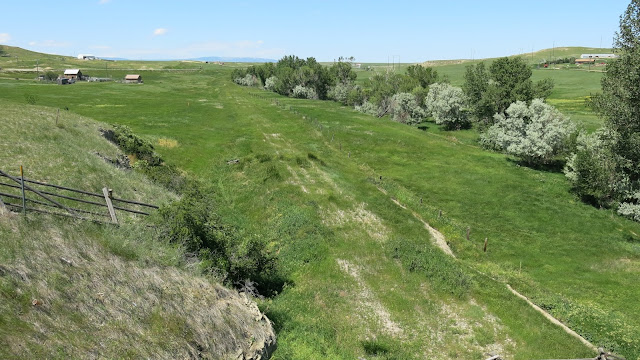 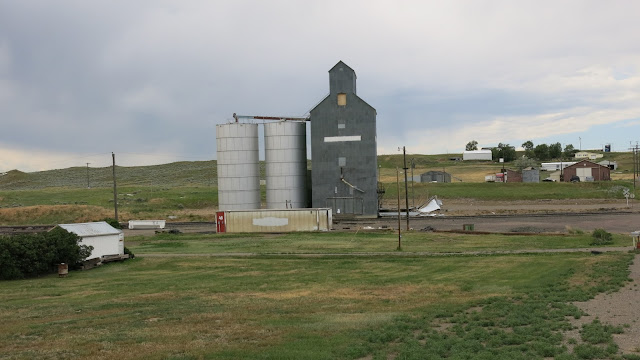 From Lewistown, a branch went east to Grass Range and Winnet, another went north to Hilger (see picture below), where it again split. Hilger had a wye, as well as Roy. 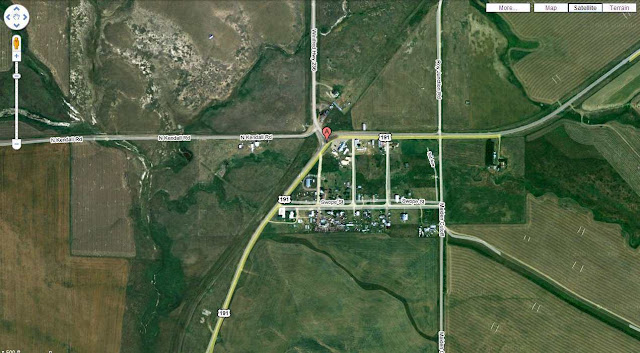 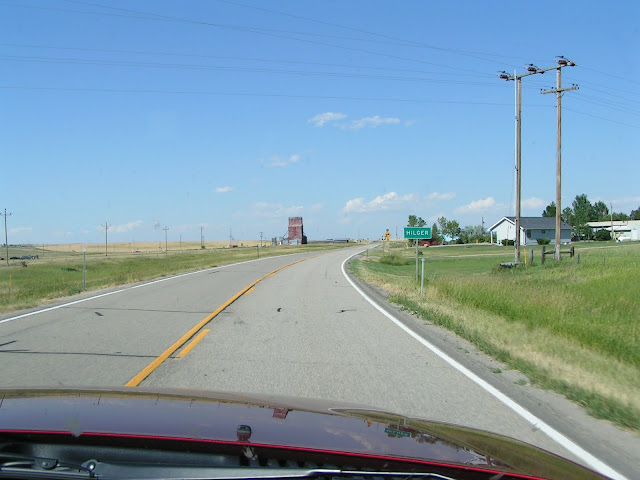 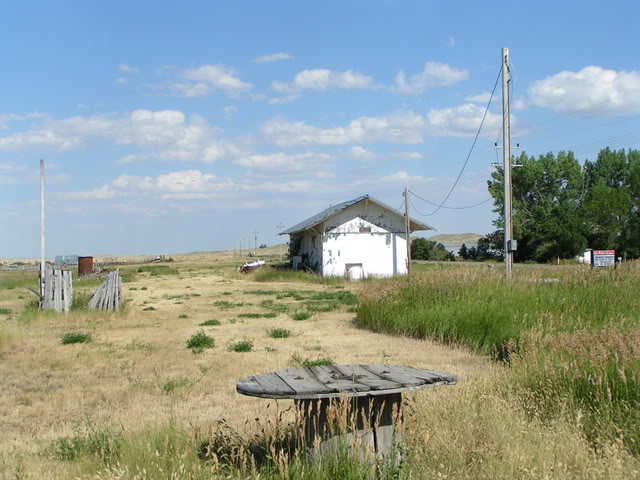 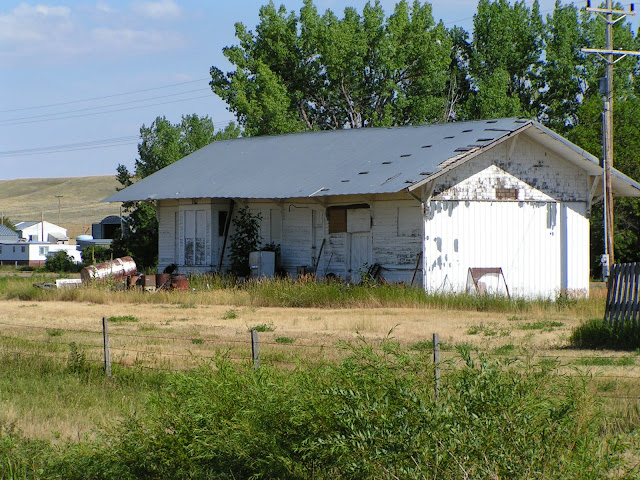 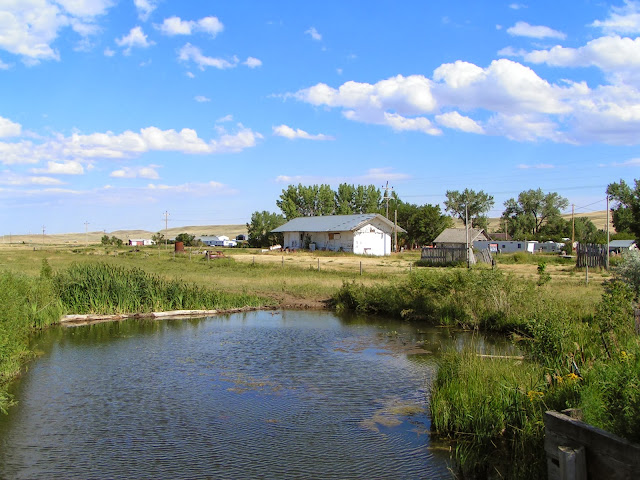 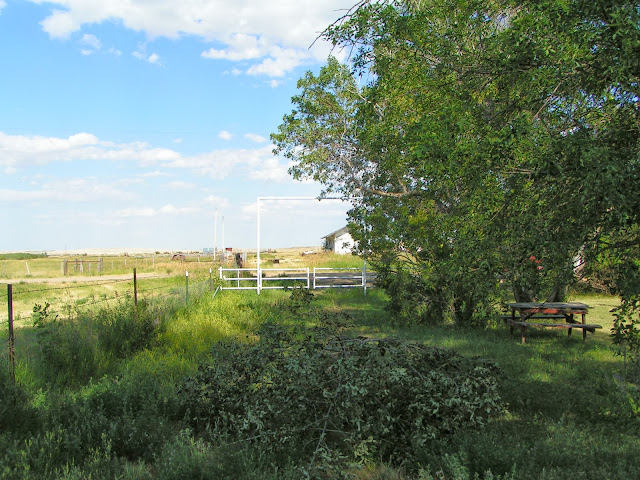 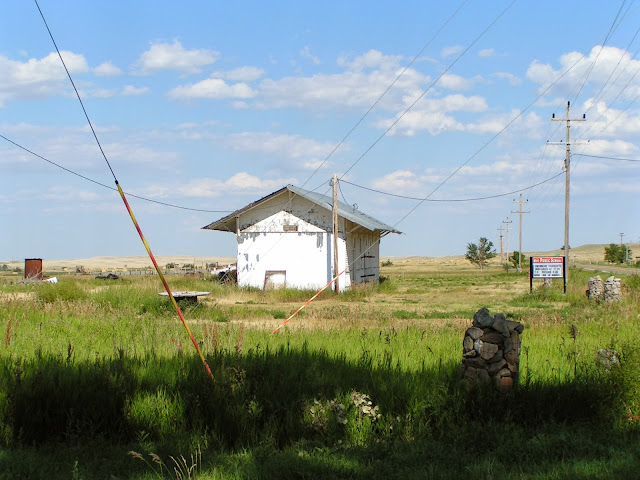 The depot at Roy Montana. 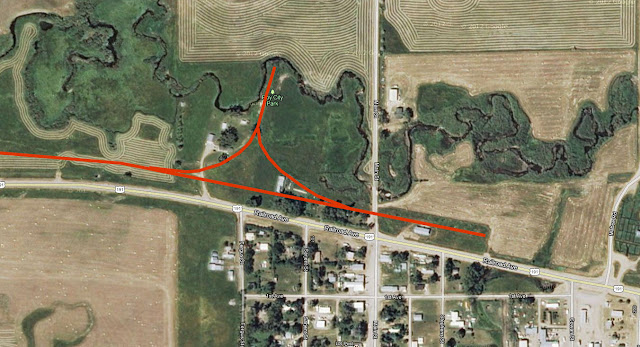 (The track and wye at Roy Mt.)
The Wye at Roy MT. It is very hard to see so marked it. The Roy branch ended just past the depot. In my research I understand that there was once a runaround track as well as a small stock yard. I 've searched for historic photos of Roy that shows these features but have been unsuccessful to date. If anyone has any they would like to share please comment below. 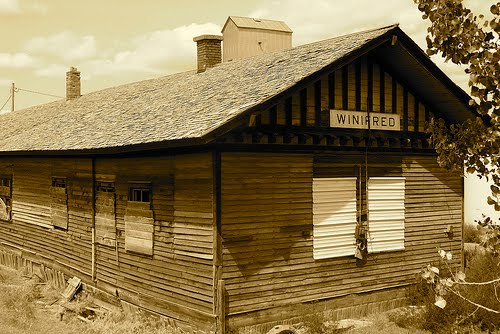 The depot in Winifred Montana. 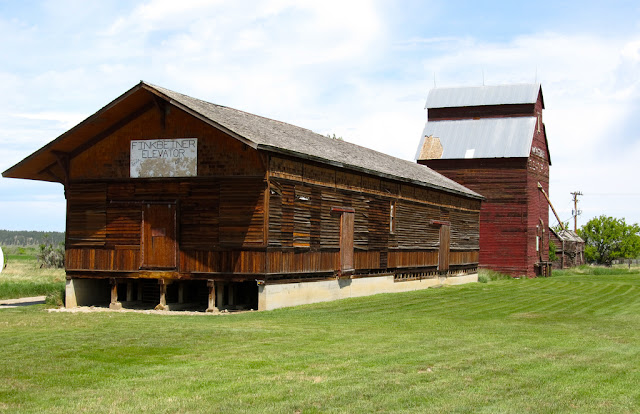 (Grass Range Depot)
(The three above photos are courtesy if montanatom1950 )

These branches were out of Lewistown and hauled supplies to the small towns, and of course hauled grain back in. The NMD was going deep into Montana's "Golden Triangle", named so because of the many vast grain fields in the area. The division was a profit maker for the "Road" 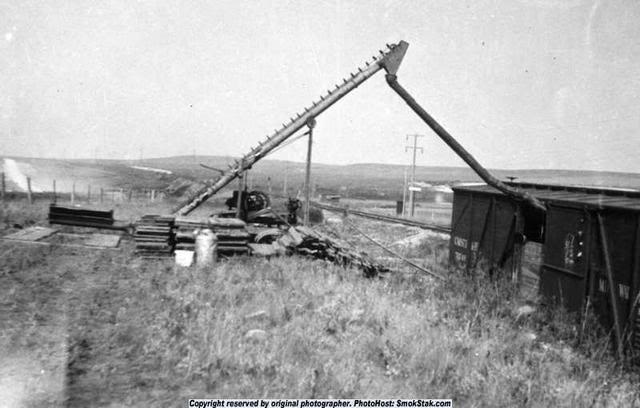 (Grain being loaded outside of Lewistown)


But from Lewistown left the "main" line of the Northern Montana, going to Great Falls and ending in Agawam Mt. Great Falls-Harlowton brought the most traffic, and grain being the #1 commodity.

From Lewistown the line traveled west to,
Denton, Geraldine, down and up through the Belt creek coulees. This area was rugged, and required many high trestles and 6 tunnels. The soil in the area was highly unstable, and the Milwaukee Road fought this problem until the end of the line. 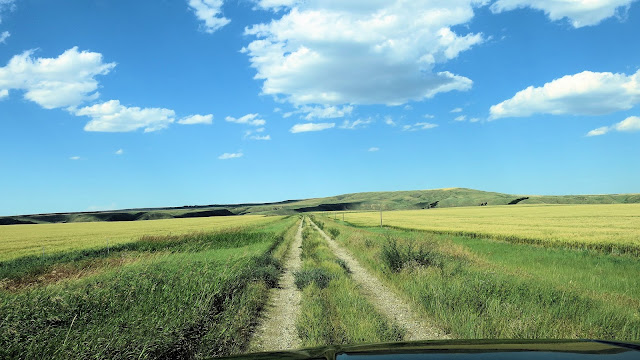 The ROW heading east towards the Red Coulee trestle. 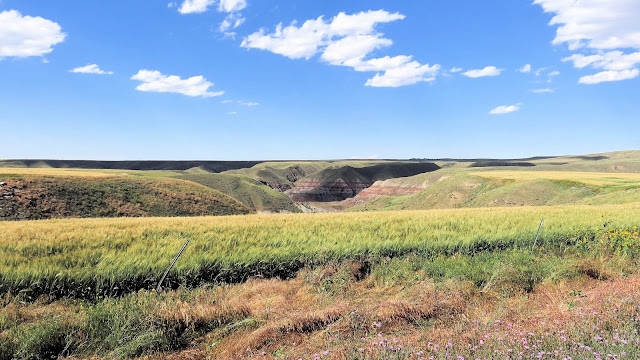 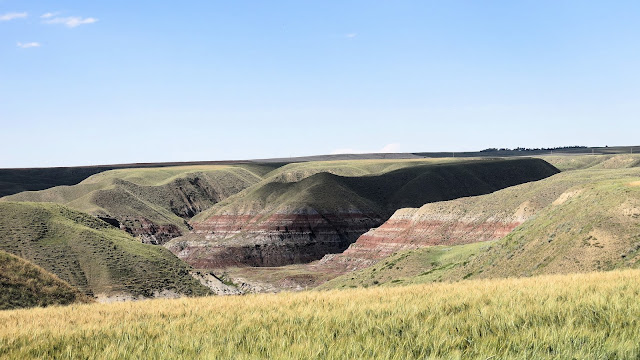 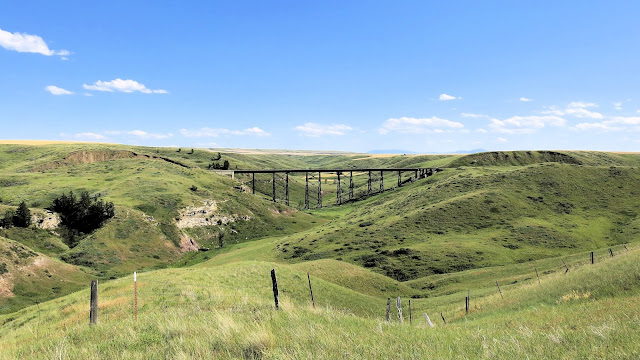 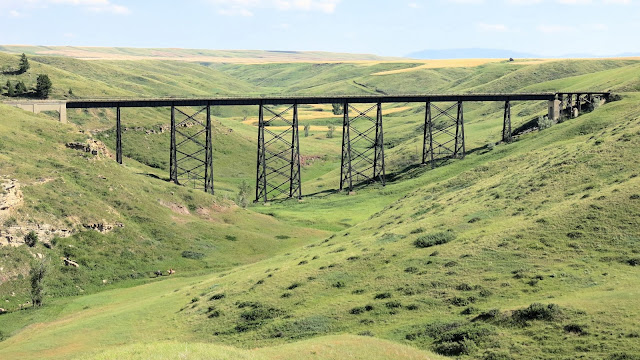 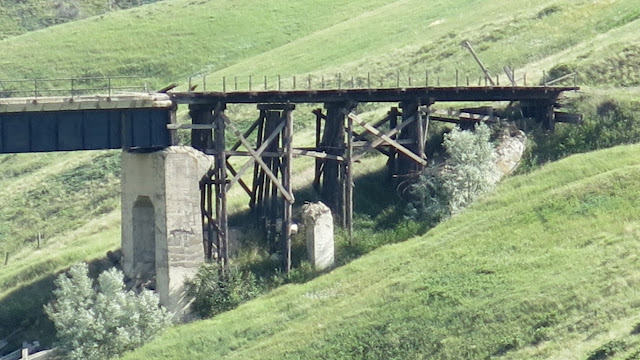 The west concrete approach to Red Coulee had some kind of issue, causing the Milwaukee to repair it with this wooden replacement. 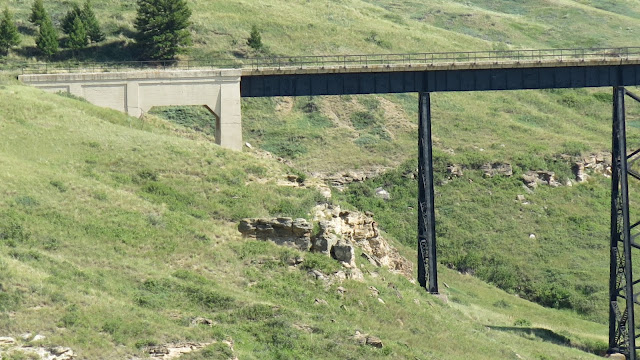 As compared to the east approach. 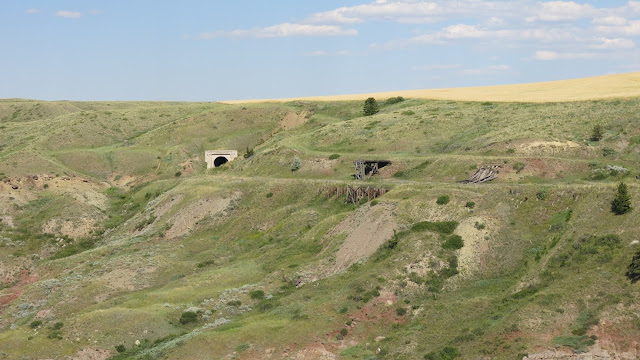 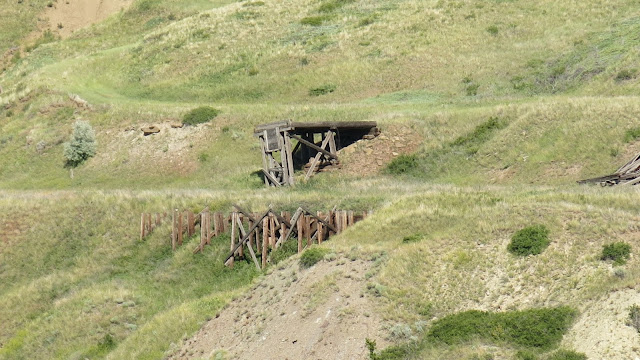 One grain loadout is still standing, the photo below shows how this was done. 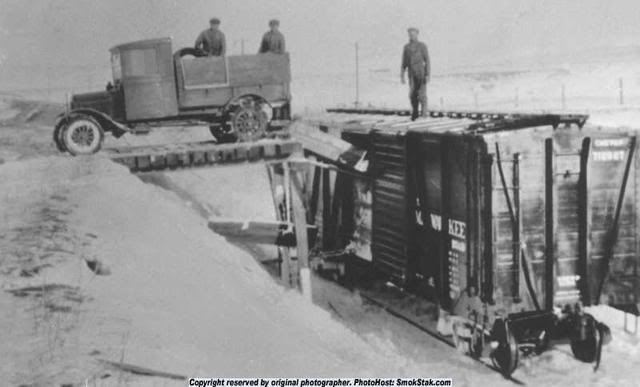 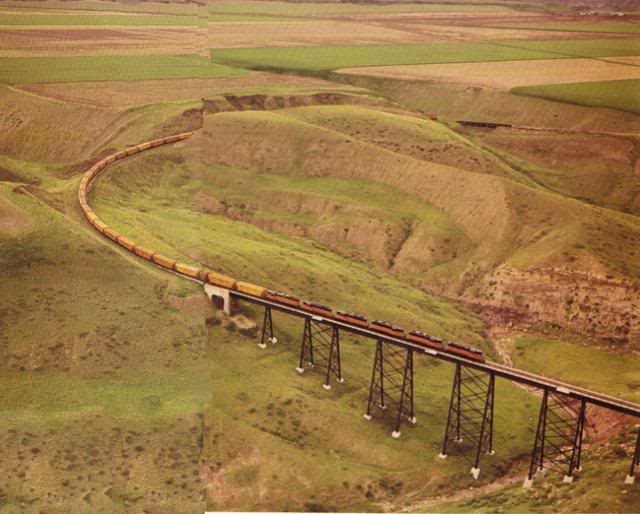 Some of the line still exists today, used by the Central Montana Railway, based in Denton MT.

From Red Coulee trestle, the line continues west and passes to the north of Malmstrom AFB. 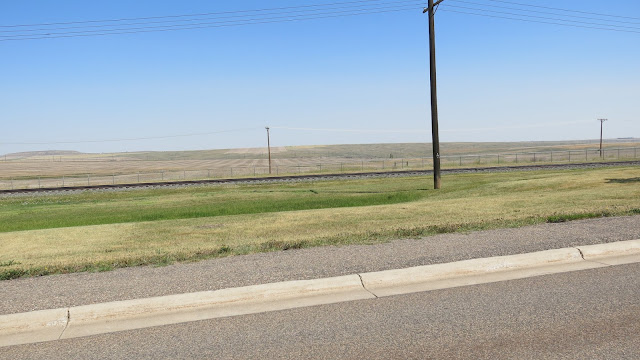 Yes the rails are still in place from the base into Great Falls, used by the BNSF to deliver coal to the power plant. 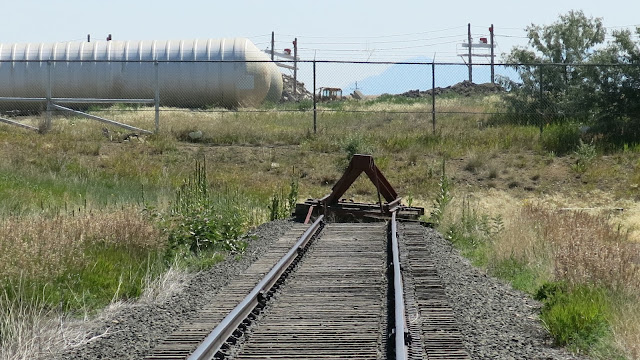 For more pictures (July 2014) of the route from Denton to Great Falls, refer to Milwaukee Road-Northern Montana Division II chapter.

Posted by Dean Kershner at 4:28 PM